« More pictures of Jake as the Prince of Persia

Our first exten­sive look at the Prince of Per­sia movie has come via ABC, in a fea­ture that inter­views PoP pro­ducer Jerry Bruck­heimer. The footage, which bears the text ‘this film is not yet rated’, could be the snip­pets of an unfin­ished trailer; it appears to be edited in a fash­ion that matches a trailer. We get to see Jake Gyl­len­haal train­ing to become the Prince, Ben Kings­ley, numer­ous shots of Jake bat­tling top­less, the expan­sive Moroc­can set and Gemma Arter­ton as Tamina. 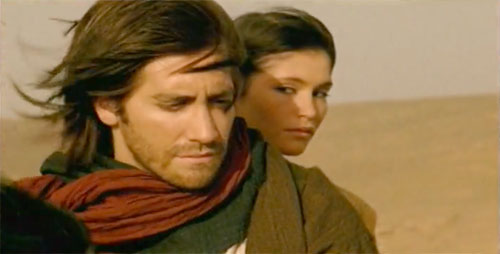 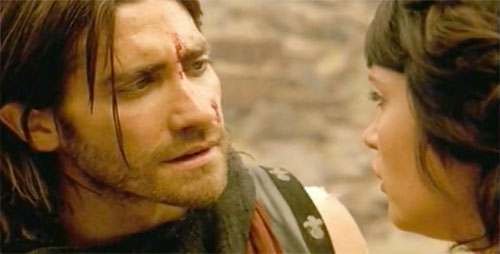 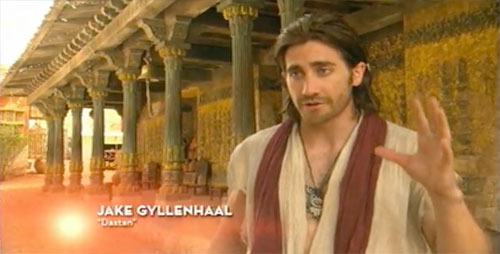 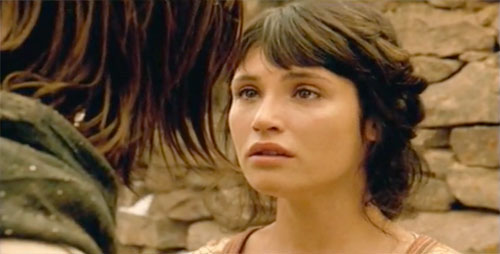 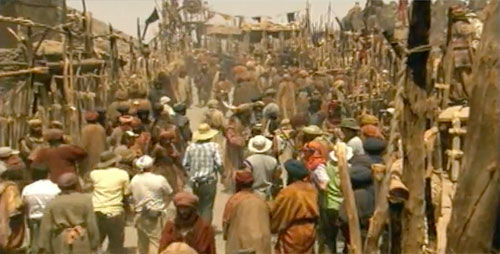 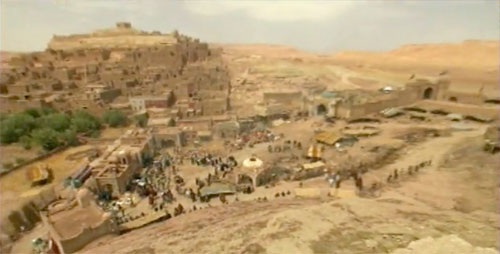 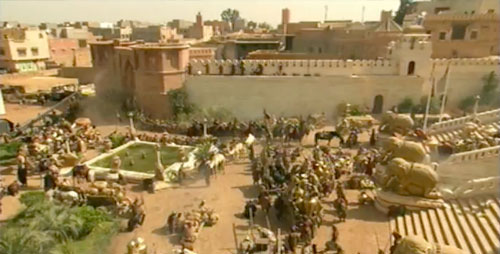 it seams every time an update comes out i am either really impressed or rather dis­ap­pointed, its always one extreme or the other

…in this case its the for­mer. i am really look­ing fore­word to this movie

WE ALL WANT TO SEE THE ORIGINAL SAND OF TIME THAT WE’D ALREADY KNOWN. NOT THE MODIFIED WHICH MAKE THE GOOD STORY TURN TO WORST STORY OF EVER.

Regards and hope all sup­port my idea.

U got my vote man. I mean i actu­all felt kinda sad when i realised the huge changes they are mak­ing to the orig­i­nal SOT story. I got realy f@#king angry too when saw the cast, i mean every­t­ing about dis movie screams TOTAL FUCKING FAILURE!!, why cant these hol­ly­wood retards see that their just fuck­ing EVERYTHING UP GOSH?!!

I’m not gay or nothin’ but Jakey Gyl­ley­wag is hoootttt.

that’s why my mom taught me to always check IMDB before run­ning off my illit­er­ate mouth!

just say­ing, DBZ Evo­lu­tion made me cry at how ter­ri­ble it is…and that was at 1/5 of the movie

Per­sians are white. they have any­where from light to dark skin, but with black hair and brown eyes. the Per­sian king­dom that orig­i­nated in the region now known as Pars province (Fars province) of Iran. the per­sians were instru­men­tal in the devel­op­ment of civ­i­lized trade. per­sia is also noted for it’s love and poetry.

They seem to be chang­ing a great story in this com­ming movie…why change the story?! All three Prince of Per­sias worked so great. How is the movies sequel going to work if they are chang­ing the first one?! There is too many ques­tions here and I have a feel­ing I’m going to hate this movie.

Always chang­ing the story is bad habit. I thing film maker should always respect the orig­i­nal story for their business.

I’m a big fan of the POP but this movie KInda
Sux com­pletely the trail­erz the worst i’ve ever seen, and the prince luks like a jerk Wahaaaa… they f*@#@ ed up every­thing and the worst part is the change in story line, I bet it’z not gonna work neway I’ll watch the movie lol.…

=))=)) did any­one see the sword in the trailer =)) =)) Haha luks like a plas­tic sword painted gold. and NO CG workz, too neway wait­ing for the movie

they always fail to make the envi­ron­ment like per­sia, its always a desert which is not exactly per­sia, so.… dont know how this one is gonna be

lol… its sad to say, but the game trail­ers for POP look 100 times bet­ter than the movie. and i agree with the plot change, its stu­pid. It makes sence to me that if one of the rea­son that the POP games were pop­u­lar is the story, then why not make the movie with the same story line? I think that POP fans want to see the same amaz­ing story and action from the game turned into real life.

Who the hell is TAMINA? There is no Tam­ina in the orig­i­nal game; there is only a girl called Farah,which doesn’t even look like this “Tamina”…I don’t have a good feel­ing about this movie, not as a fan of the prince of per­sia game trilogy…

I am really look­ing for­ward to see­ing this movie. I am totally con­vinced that it will be a good one, even before see­ing it. You see, my niece, Mar­i­anne Jenk­ins, is the pro­duc­tion man­ager, so I guess you could say that I am a lit­tle prej­u­diced! Seri­ously, though, I believe that this will be a great movie. Mar­i­anne also worked on Troy, and that, too, turned out to be excellent.

I have a few things to say about this movie, I’m not con­vinced they’ll be able to pull of any major changes in the first movie with­out totally mess­ing up the next two parts of the tril­ogy. I wish they’d do some­thing like the Lord of The Rings movies, where only minor changes were made to the movie so it wouldn’t be unbear­ably long. Also, why make the Prince a street urchin instead of a prince by birth? Hol­ly­wood always over­does that rags to riches thing. Mor­roco also wasn’t a good choice for the shoot­ing loca­tion. The sets that I’ve seen so far don’t exactly cap­ture the riches and mag­i­cal feel­ing to the loca­tion in the Sands of Time game.

For those of you who are fans of the games will be EXTREMELY disappointed/pissed.
This movie is going to suck ass.

This makes me want to cry, why would good actors make such absurb career deci­sions. I liked the 3 ps2 Prince of Per­sia games a lot, but this most recent one is in my opin­ion the worst game ever cre­ated (3 worst games of all times in order 1. Prince of Per­sia 2. Blitz the League 2 3. Def Jam Icon) but for God’s sake what were they even think­ing turn­ing this into a movie? I won’t even watch this when it’s on free t.v.

Yo New­poPois­gay, if you dont like it why u wast­ing your time on this page, just dip set k niggy

Is all of the united states deserts?Iran like united states also
have jungles,forests,green hills and mountains,beautifull waterfalls,and in some parts deserts,I dont know why they think the coun­try is cov­ered in deserts?I think the devel­op­ers should
have at least vis­ited Iran.

Is all of the united states deserts?Iran like united states also
have jungles,forests,green hills and mountains,beautifull waterfalls,I dont know why they think the coun­try is cov­ered in deserts?I think the devel­op­ers should have at least vis­ited Iran.

Hol­ly­wood is tak­ing a BIG chance with this movie. I’ts either so good it wins dozens of oscars & is a NO.1 best sell­ing DVD, or it is one of the worst movies ever made.

hey dudes, i agree they are try­ing with its orig­i­nal story from ’89
but the game story is much bet­ter than that. And where is Farah(the Indian princess)? she looks cool with her bow and arrow.
is Tam­ina the Indian princess? at least i hope they didn’t change the char­ac­ters of the sand monsters.

this is great.the movie well be great. i think it well be like the lord of the rings

I am sure its going to be a greate movie ‚I cant wait to see it in a big screen a few of my friends have taken part in it but as extras , I should be ask­ing the Direc­tor Mr newel why there are no per­sian super stars in this movie ? and why the call the prince Das­tan ? Das­tan is the fam­ily name and the name of the prince should be Sohrab the son of Ros­tam ‚I have red in the books that also Sohrab Das­tan like his father was of a huge build body and much taller than Jake whos play­ing Dastan(Sohrab).

First off… I REALLY..really hate peo­ple who com­plain about chang­ing the story. Ok…You like the story in the game, so maybe you should be play­ing the game. Movies are a seper­ate Genre. Its like a movie based off a book and peo­ple say­ing “ZOMG they didnt include every line.” and if your going to argue a point atleast do it in a way that doesnt sound like, “Whaaaa dis movie gunza sux so muches cause itz diff dan dah story in dah gamez.” You cant say it sucks because you havent see it…just like I cant say its good. Again movies are a dif­fer­ent genre…Just like books, and video games…certain this only work in their respec­tive genre.

I know I’m at the end of the string here, but who the fuck cares about the actual story, it’s a game. “Sus­pend your your dis­be­lief,” as my friend always said. I LOVED all of the POP’s, but noth­ing was ever orig­i­nal. I hope i get the chance to arrange music for ubi one of these days.

With any video game movie adap­ta­tion, there are going to be changes. I’m an avid Prince of Per­sia fan, I’ll even go as far as to say that it’s my favorite action/adventure game fran­chise. But I’m still look­ing for­ward to this movie. I know that the story won’t be the same, but as long as it stays true to the core of the game (i.e., the acro­bat­ics and action sequences) along with the Prince’s witty dia­logue exchanges with his Princess, I think the movie will do fine. I highly doubt it will suck as much as the peo­ple before me think it will.

This movies goin to be sick! cant wait may yesss woop! woop!

Wow, It’s really great. I just got to know about this site. Great effort. Wish you all the best.

this is very bad

is there another new prince of per­sia com­ing soon? im inster­rested to see the war­rior within i wish they could do it!