The bil­lion­aire Super Hero in the iron suit is back in Mar­vel Stu­dios’ and Para­mount Pic­tures’ thrilling sen­sa­tion IRON MAN 2, debut­ing on Blu-ray, DVD, and dig­i­tal down­load Sep­tem­ber 28, 2010. Packed with fan­tas­tic bat­tles, stun­ning visual effects and an all-star cast, the new block­buster adven­ture will be avail­able to own as a three-disc Blu-ray/DVD combo pack with dig­i­tal copy, as a lim­ited edi­tion two-disc DVD with dig­i­tal copy, or as a sin­gle disc DVD. In this highly-anticipated sequel, Robert Downey Jr. (Sher­lock Holmes, Tropic Thun­der) reprises his role as Tony Stark, a.k.a. Iron Man, in a thrill-a-minute story filled with explo­sive action, new suits and pow­er­ful new vil­lains. The phe­nom­e­nal cast includes Gwyneth Pal­trow (Iron Man), Don Chea­dle (Oceans series), Scar­lett Johans­son (He’s Just Not That Into You) as the seduc­tive Black Widow, Mickey Rourke (The Wrestler) as the venge­ful Whiplash, as well as Sam Rock­well (Charlie’s Angels) and Samuel L. Jack­son (The Other Guys). 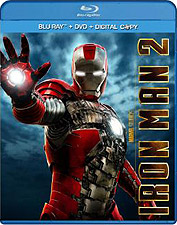 To date, with over $300 mil­lion at the domes­tic box office, IRON MAN 2 has delighted audi­ences with its com­bi­na­tion of high-intensity action, intel­li­gence and humor. The Blu-ray/DVD combo pack comes fully loaded with immer­sive and inter­ac­tive bonus mate­ri­als includ­ing an in-depth, feature-length doc­u­men­tary of the mak­ing of the film, reveal­ing fea­turettes about Nick Fury, Black Widow and War Machine, a look inside the cre­ation of Stark Expo, deleted scenes and an exclu­sive peek inside the Mar­vel Super Hero Uni­verse through the S.H.I.E.L.D. Data Vault.

The single-disc DVD includes the fea­ture film with com­men­tary by Jon Favreau.

This ET set visit, unlike pre­vi­ous ones, comes chock full of tasty behind the scenes moments. Whiplash attack­ing a Rolls Royce as Pep­per tries to escape, shots of Natalie (Black Widow/Scarlett Johans­son) in leop­ard skin try­ing on the Iron Man armor, explo­sive For­mula 1 scenes, the love tri­an­gle and plenty more.

END_OF_DOCUMENT_TOKEN_TO_BE_REPLACED

Enter­tain­ment Tonight are run­ning an Iron Man 2 fea­turette this Thurs­day, you can catch a quick pre­view below. Be warned, it’s filled with quickly zoom­ing in and out cam­eras and quotes such as, “A set so big we sent two reporters”. Scar­lett Johans­son also, “kicks some seri­ous seri­ous ass”.

Bid­ding to meet Scar­lett Johans­son at the pre­mière of Iron Man 2 has started, in sup­port of Oxfam Amer­ica. At the time of writ­ing they are going for $3,500 with 11 bids.

Q: WHAT IS INCLUDED IN THIS AUCTION?
A: You are bid­ding on tick­ets for two (2 seats) to the U.S. pre­mière of IRON MAN 2, the oppor­tu­nity for you and your guest to meet Scar­lett Johans­son, and a com­pli­men­tary hair & makeup/grooming ses­sion at Christophe Salon (for 1 per­son). Please note: All travel, hotel, and any local trans­porta­tion arrange­ments are the respon­si­bil­ity of the win­ner and are not included in this auction.

Q: WHEN & WHERE IS THE PREMIERE?
A: The pre­mière is cur­rently sched­uled for May 2010 in Los Ange­les. Early arrival at the pre­mière is rec­om­mended. The date and loca­tion are sub­ject to change, but the win­ner will be given an oppor­tu­nity to attend the changed date/location should that occur. The seller will not reim­burse any travel costs incurred due to a changed date/location.

Jon Favreau pre­miered the first Iron Man 2 footage at this years Comic Con. Many descrip­tions have appeared online, I’ve included two in-depth descrip­tions in the full post and sum­ma­rized below.

- The footage opens in the giant donut and a con­ver­sa­tion between Tony Stark and Nick Fury — Stark doesn’t want to join the team.
– It then cuts to a court­room scene that sees the gov­ern­ment attempt­ing to strip Stark of his Iron Man suit
– Rhodey enters to tes­tify against Stark.
– Whiplash is out to get Tony as revenge for the Stark fam­i­lies’ atroc­i­ties, explained by a voiceover whilst Rourke con­structs a suit of his own.
– There’s a quick shot of Black Widow in action and then Whiplash flick­ing his two great electro-whips.
– Justin Ham­mer (Sam Rock­well) is now seen, talk­ing about Iron Man suit mod­i­fi­ca­tions “fire­power” — retro­fitting guns and armor. Rhodey says he’ll take it.
– Then there’s a quick shot of the com­plete War Machine suit.

END_OF_DOCUMENT_TOKEN_TO_BE_REPLACED

We’ve seen Tony Stark and Whiplash in Iron Man 2, now’s our first look at the next major new char­ac­ter, the Black Widow (also known as the Russ­ian spy Natasha Romanoff), played by Scar­lett Johans­son. These shots come cour­te­ous of EW and Leroy. 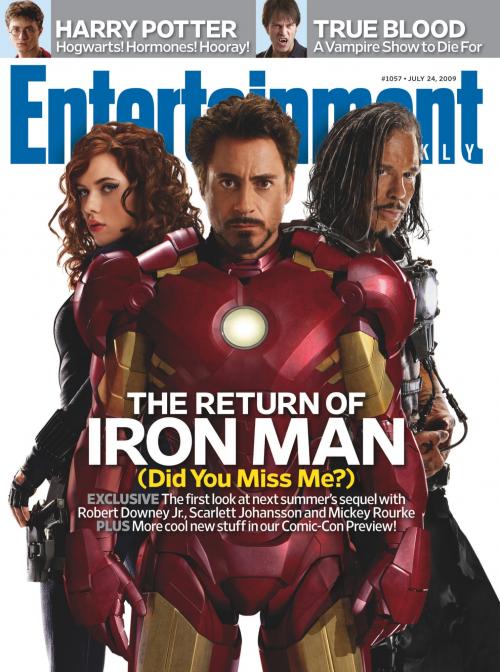 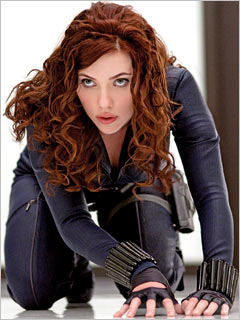 The arti­cle also offers up some very inter­est­ing plot details.

Rourke also reveals that his char­ac­ter enjoys talk­ing to a cock­a­too whilst drunk. 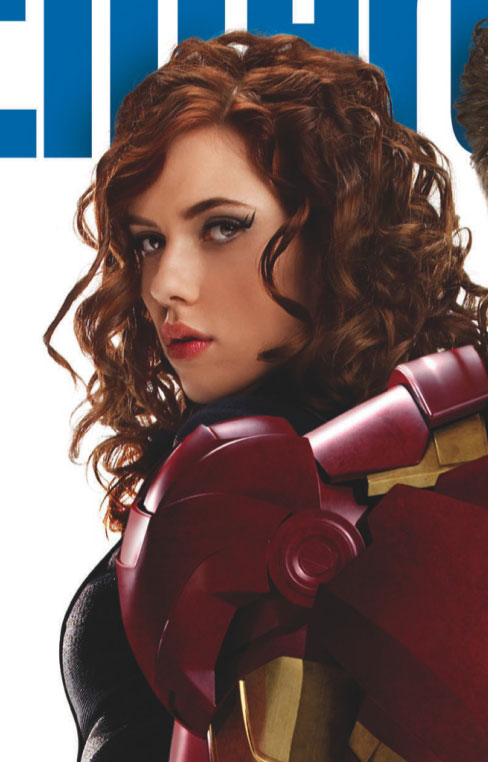 Attack of the show co-host Olivia Munn made it known, via Twit­ter, that she would have a role in Iron Man 2 — though couldn’t legally dis­cuss it yet. On Twit­ter she sug­gested her role was big­ger than a one minute appear­ance, watch “Big Stan” for details.