Prince of Persia: Sands of Time – The Movie

Did you catch the Prince of Persia poster? March 3rd, 2009

If any of you decided to watch Con­fes­sions of a Shopo­holic you may have missed the Prince of Per­sia movie poster flash­ing in the reflec­tion of the cab, do not fret, TTeba has con­tacted us with a clip show­ing that very scene. The poster itself looks very rem­i­nis­cent of the video games.

The por­trayal of the Prince in the movie seems to be an inter­est­ing com­bi­na­tion of pre­vi­ous games, as one reader points out — the movie is enti­tled ‘Sands of Time’ — in the first look video we see Jake dressed in a white robe — sim­i­lar to the 1989 prince and we also see clips of him donned up in the War­rior Within prince out­fit. And now in this poster there is a hint of the Two Thrones char­ac­ter portrayal.

New Poster to appear in “Confessions of a Shopoholic” January 25th, 2009

The new poster for the Prince of Per­sia movie will first be appear­ing in a rather unusual place, the rather cheeky Jerry Bruck­heimer has put it into his new movie, “Con­fes­sions of a Shopo­holic”, which’ll be the first place you can see it, so report MTV:

Fans look­ing for a first look at the poster art for the upcom­ing, “Prince of Per­sia: The Sands of Time” will have to head to the movie the­ater to see it, though it won’t be in the place they might expect.

Mega-Producer Jerry Bruck­heimer has hid­den the poster inside his lat­est film, “Con­fes­sions of a Shopa­holic”, appear­ing as a Times Square adver­tise­ment about halfway into the film. It joins posters for a num­ber of other Bruck­heimer pro­duc­tions, includ­ing the upcom­ing “G-Force”, though “Per­sia” is unique in that it marks the first time the films’ art­work has been seen anywhere.

Promi­nently fea­tured on the poster is lead actor Jake Gyl­len­haal in full-costume as Prince Dastan.

ET Online have posted a video inter­view with Jake Gyl­len­haal, show­ing quick snip­pets of action, Jake hav­ing some fun and Jerry Bruck­heimer. It’s pretty laid back, and, as media movie scoops tend to go, this one is pretty good.

Pic­tures from the video

Defamer have revealed the first image of Ben Kings­ley in full cos­tume as Nizam! 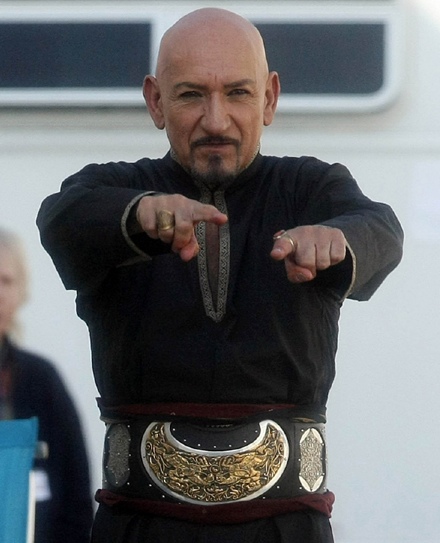 Thanks Lucinda and hobo123!

The French site Cloneweb has posted shots of extras form the Prince of Per­sia movie adap­ta­tion in full cos­tume, some­where near Mar­rakech in Morroco.

Our first glimpses at the con­struc­tion of the Prince of Per­sia movie set have come to us via Kor­ben & Rocho. These pic­tures were taken at Ait Ben Had­dou in Morocco; it looks like they are cre­at­ing a full town with streets et al. It is also inter­est­ing to com­pare them to the con­cept art that was released in April 2007. 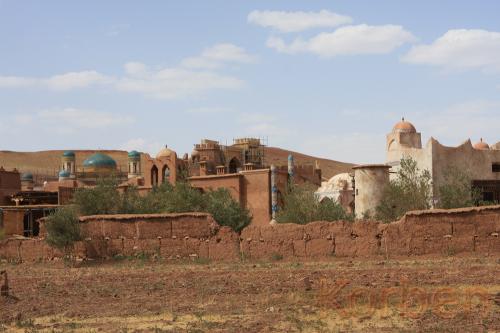 First images of Jake Gyllenhaal as The Prince August 12th, 2008

These first glance images come via Just Jared, show­ing a shirt­less Jake Gyl­len­haal look­ing all hunky and manly as The Prince.

Dis­ney has today announced that the Prince of Per­sia movie adap­ta­tion will no longer be hit­ting its June 19th 2009 release date — instead being pushed back a whole year to May 28th 2010. Rather than con­tend with the likes of Trans­form­ers 2, the PoP movie will now be up against Shrek Goes Fourth and Marvel’s new title, “Thor”.