Listen to the Transformers 2 Soundtrack in full June 17th, 2009

Spo­tify is a desk­top appli­ca­tion that allows you to lis­ten to any music you like, when­ever you like, full albums if you wish — it’s legal and free. It has recently put online the Revenge of the Fallen sound­track so you can lis­ten to the whole thing through from New Divide to Cheap Trick!

For those of you in the UK, the sound­track is already avail­able for pur­chase:
Trans­form­ers 2 Sound­track (£7.99, MP3)

And to high­light the awe­some­ness of Spo­tify, here’s the track I have on right now:
You Love Her Coz Shes Dead — Blood Lust 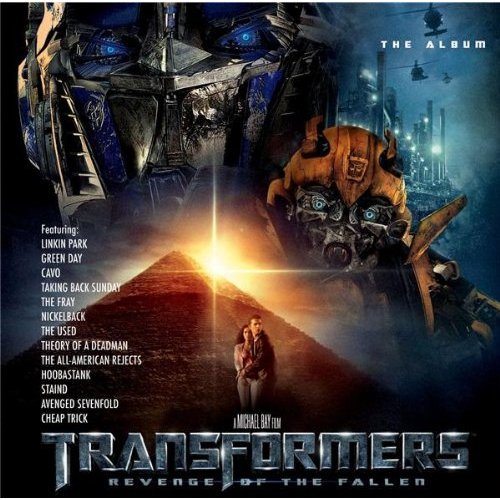 The music video for Linkin Park’s sin­gle, “New Divide” is now online on MySpace, fea­tur­ing some new clips from Revenge of the Fallen.

Hark­ing back to the orig­i­nal theme tune, Cheap Trick have recorded a recre­ation of the 1980s “Trans­form­ers, trans­form­ers, more than meets the eye” num­ber. It has lov­ingly been placed on YouTube for us to enjoy in all its cheesy glory:

To aug­ment this, here’s the final track­list for the Revenge of the Fallen score. The titles leave lit­tle to the imagination.

Michael Bay’s offi­cial site has released the track list­ing for the Revenge of the Fallen sound­track along with the album art­work. You can already pre-order the sound­track from Ama­zon ($13.99), the sound­track is due for release on June 23rd. 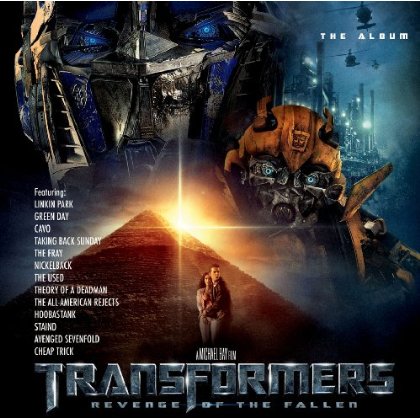 Linkin Park’s new sin­gle for Trans­form­ers: Revenge of the Fallen has it’s online pre­mière right now. I have to say, the open­ing is pretty tight: 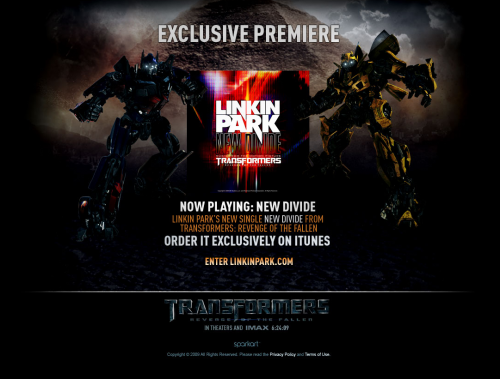 A lit­tle bit pre­ten­tious this, a trailer for a song that is, but here it is, Linkin Park talk­ing about the process behind their upcom­ing Revenge of the Fallen track, “New Divide”:

Transformers 2 Soundtrack and Score up for pre-order May 14th, 2009

BREAKING NEWS: Linkin Park will be work­ing on the score for Trans­form­ers 2: Revenge Of The Fallen.

Although I wasn’t at lib­erty to say it before, the song I’ve been ref­er­enc­ing here on mikeshin​oda​.com in the past few weeks…is actu­ally being done for Michael Bay’s new Trans­form­ers film, due out June 24th.

In addition–and prob­a­bly ever cooler–we have been offered the unique oppor­tu­nity to help score the film. The song we wrote is being used as one of the themes, and we will be writ­ing var­i­ous inter­po­la­tions on that theme, and try­ing out some other the­matic ideas as part of the (very large) team scor­ing the film.
My band­mates and I are work­ing with award-winning film com­poser (and res­i­dent ass-kicker) Hans Zim­mer. We met with Hans last week, and heard some of the incred­i­ble things he and his guys have done with our new song. In the next few days, we’ll be doing some work with Hans’ amaz­ing writ­ing and record­ing crew.

Michael Bay has shown us select scenes from the film, and it looks incred­i­ble. I can’t wait for you to see it.