Hans Zim­mer and James New­ton Howard were recently fea­tured on KCRW’s “Morn­ing Becomes Eclec­tic”; on their web­site you can lis­ten to the inter­view and excerpts of the sound­track or read the transcript.

“I kept churn­ing around…how do you describe anar­chy, how do you describe a vil­lian and not do it in a way that’s been done before? One of the things I got very much from the char­ac­ter was a fear­less­ness, and an even­ness in a way. The Joker is the only per­son you can trust in the movie. The Joker is the only one who will never lie to you because he is con­sis­tent about his phi­los­o­phy,” said Zimmer.

“I really wanted to do the whole thing just with one note. I had this idea that rather than what a note is in the con­text of the notes sur­round­ing it, what could I do emo­tion­ally through a per­for­mance within one note? How much can I stretch the mean­ing of a sin­gle note and get it down to such min­i­mal­ism. I failed slightly. I had to use two notes in the end.”

Seems like the tabloids are at it again, this time with rumors that Rachel Weisz will be play­ing Cat Woman, Shia LaBoeuf to play Robin and Eddie Mur­phy as The Rid­dler — where do they get this crap? Suf­fice to say, it’s all made up drivel.

Time to get some real voices on the sequel to The Dark Knight; Alan Horn, pres­i­dent of Warner Bros. has recently spo­ken with Col­lider:

We’ve been talk­ing to Chris Nolan and what we have to do is get him in the right place and have him tell us what he thinks the notion might be for a great story, but Chris did a great job and we’d love to have him come back and do another one.”

As far as the tim­ing of the project, he went onto say: “The story is every­thing and we are very respect­ful of Chris. We have a won­der­ful rela­tion­ship with him and we are going to be respect­ful of his tim­ing and we want to get it right. Also, I think the fans expect that – they want us to make a ter­rific movie – we have to give them another great movie.”

Christo­pher Nolan has been speak­ing with USA Today about the suc­cess of The Dark Knight and its poten­tial sequel:

Nolan says he is jot­ting notes and doing some rough out­lines for a third story, but he hasn’t yet found any­thing he’s will­ing to com­mit to film, despite Warner Bros.’ eager­ness to get a new film underway.

“It was obvi­ous when the box office was so big ($530 mil­lion domes­ti­cally) that we had under­es­ti­mated how ready fans were to reboot the fran­chise,” he says. “The worst thing you could do now that you’ve got­ten the plane back in the air is mess up the landing.”

[Talk­ing about sequels and a third movie] “I don’t know why they’re hard to do,” Nolan says. “Maybe there’s so much expec­ta­tion to them. But I wouldn’t want to do one if it weren’t going to be as good as the first or sec­ond. That’s not respect­ful to the fans.“

Nolan also points out his rea­sons for not putting out­takes or deleted scenes on the DVD — not a sin­gle extra scene involv­ing The Joker:

Nolan says he wasn’t keep­ing deleted scenes from fans. “For my past three films, I really haven’t had scenes that didn’t make it in the movie,” he says. “If it’s in the final script, I tend put it on screen.”

Any out­takes, how­ever, were inten­tion­ally left off the DVD. “I don’t like out­takes or gag reels,” Nolan says. “I don’t think it’s respect­ful to the actors, who signed on to have their per­for­mance on screen, not the takes that didn’t work out. It dis­cour­ages actors from going all-out if they think every mis­take is going on the disc.”

In speak­ing with the LA Times and asked whether Bat­man would par­tic­i­pate in any DC crossovers, Christo­pher Nolan responded,

Nolan: I don’t think our Bat­man, our Gotham, lends itself to that kind of cross-fertilization. It goes back to one of the first things we wran­gled with when we first started putting the story together: Is this a world in which comic books already exist? Is this a world in which super­heroes already exist? If you think of “Bat­man Begins” and you think of the phi­los­o­phy of this char­ac­ter try­ing to rein­vent him­self as a sym­bol, we took the posi­tion — we didn’t address it directly in the film, but we did take the posi­tion philo­soph­i­cally — that super­heroes sim­ply don’t exist. If they did, if Bruce knew of Super­man or even of comic books, then that’s a com­pletely dif­fer­ent deci­sion that he’s mak­ing when he puts on a cos­tume in an attempt to become a sym­bol. It’s a para­dox and a conun­drum, but what we did is go back to the very orig­i­nal con­cept and idea of the char­ac­ter. In his first appear­ances, he invents him­self as a totally orig­i­nal creation.

GB: That doesn’t lend itselt to hav­ing him swing on a rope across the Metrop­o­lis skyline.

Nolan: Yes, com­pletely dif­fer­ent. It would have given a very, very dif­fer­ent mean­ing to what Bruce Wayne was leav­ing home to do and com­ing back home to do and putting on the cos­tume for and all the rest. We dealt with on its own terms: What does Bat­man mean to Bruce Wayne, what is he try­ing to achieve? He has not been influ­enced by other super­heroes. Of course, you see what we’re able to do with Joker in this film is that he is able to be quite the­atri­cal because we set up Bat­man as an exam­ple of intense the­atri­cal­ity in Gotham. It starts to grow out­ward from Bat­man. But the premise we began with is that Bat­man was cre­at­ing a wholly orig­i­nal thing. To be hon­est, we went even fur­ther than the comics on this point. I can’t remem­ber at what point in the comics his­tory the idea came about that he was a fan of Zorro as a kid. I haven’t researched that, but I don’t believe it goes back ter­ri­bly far.”

The inter­view con­tin­ues by dis­cussing Nolan’s next project, his time off and the upcom­ing Acad­emy Awards:

GB: You’ve said you aren’t sure what you next project will be. But clearly Warner Bros. looks at Bat­man as a core part of their movie busi­ness, per­haps now more than ever, and there are mar­ket­place pres­sures on them to sched­ule the next install­ment of the fran­chise. Are you get­ting a lot of pres­sure to make a decision?

Nolan: They’re being extremely gra­cious. I have a very good rela­tion­ship with the stu­dio. They know that I really needed to go on hol­i­day and take some time to fig­ure what I want to do next. They’ve been very respect­ful of that, which is ter­rific and one of the rea­sons I enjoy work­ing with Warner Bros.

GB: The nom­i­na­tions for the 81st Acad­emy Awards will be announced in Jan­u­ary. How mean­ing­ful would it be for the cast and crew of “The Dark Knight” if the late Heath Ledger is nom­i­nated for best sup­port­ing actor?

Nolan: I think the thing that has always been impor­tant to me in light of Heath’s death is the respon­si­bil­ity I’ve felt to his work. The respon­si­bil­ity of craft­ing the film in such a way that his per­for­mance came across the way he intended. Clearly, that has been the case. That’s one of the rea­sons I take such pride in the film.

I felt a great wave of relief, really, as peo­ple first started to see the per­for­mance and it was clear that they were get­ting the per­for­mance. It’s easy to for­get with every­thing that’s hap­pened what an enor­mous chal­lenge it was for Heath to take on this iconic role. He rose to that chal­lenge so admirably that any expres­sion of peo­ple being excited or moved by his per­for­mance is a won­der­ful thing. What­ever form that takes. Peo­ple com­ing to see his per­for­mance and get­ting it. It’s been extremely sat­is­fy­ing for all of us already. Any­thing that adds to that would be wonderful.

Mon­day July 21st was the UK and Euro­pean pre­mière of The Dark Knight, Chris­t­ian Bale, Aaron Eck­hart, Mag­gie Gyl­len­haal, Chris Nolan, Michael Caine and the tum­bler were all at hand to sign auto­graphs, greet fans and attend the shindig. 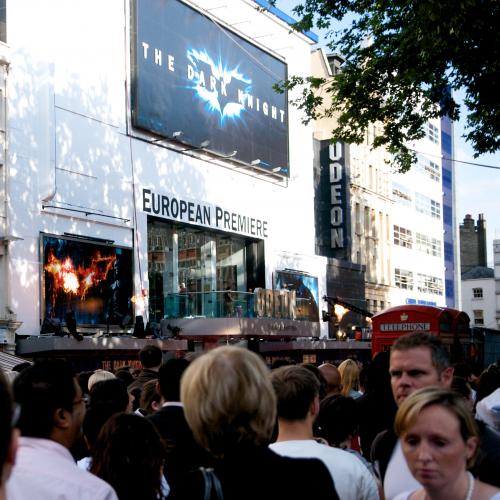 Below is a 17 video playlist of tele­vi­sion fea­tures, video inter­views and can­did shots of the Bat­mo­bile, cast and crew. YouTube is play­ing silly bug­gers and not let­ting me edit this playlist so the order of the videos may not be too great for the moment. Enjoy.

Images from out­side by Samuel Judge:

Images from inside by Ben30:

Com­cast have posted some more exclu­sive videos — this time inter­views with Gary Old­man, Mag­gie Gyl­len­haal, Christo­pher Nolan, Chris­t­ian Bale and Aaron Eck­hart. On top of this there is a behind the scenes look at Gotham Knight.

I also for­got to men­tion some of their other exclu­sive fea­turettes which are avail­able in stan­dard and high def­i­n­i­tion. I’ve included links to the high def­i­n­i­tion ver­sions for ease, stream­ing was being a bit slow for me earlier. 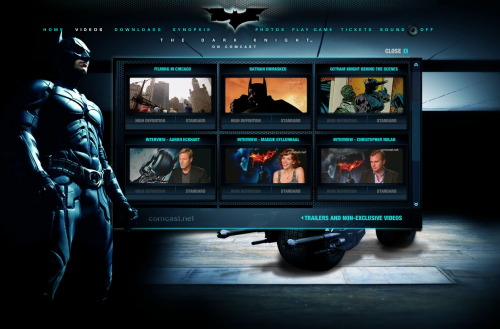 The embed­ded video below shows Mag­gie Gyl­len­haal and Aaron Eck­hart in an inter­view on The Today Show, talk­ing about the Dark Knight pre­mier and the feel­ings it has gen­er­ated amongst view­ers — under the ban­ner “Fresh Faces in Gotham City”:

Amongst the Dark Knight pre­mier videos, a slew of video inter­views with the cast and crew have popped up, much to our delight. This embed­ded 20 video playlist also fea­tures Gary Old­man on the Conan O’Brien show and The View.

Many thanks to the YouTube user fal­co­nun­der­ground that has been stay­ing on top of these as best possible.